Whether consider the archaeological reserves or call as the historical beauty, these top 10 forts of Pakistan are….

Attainment of spirituality and submission of devotion, the sacred place to worship for the Muslims is called mosque. Indeed, the antique structure and beautiful architecture with domes and minarets rank the mosques of Pakistan among the greatest and most beautiful mosques of the world.

Here we are presenting the most famous and prominent mosques of Pakistan.

Privileged as the largest mosque of Pakistan, Faisal mosque is located under the beautiful surroundings of Foothills of Margalla Hills in Islamabad, the capital of Pakistan. The mosque started to build in 1976 and named after the name of Saudi King Shah Faisal who granted 130 million Saudi Riyals as a gift for its construction.

If we talk about the distinct architecture of the mosque, the design of the Turkish architect was selected after conducting an International campaign. Unlike conventional design, Faisal mosque has contemporary architecture having eight-sided concrete shells which are truly inspired by Bedouin Tent. Faisal Mosque is the most desired and visited tourist attraction of its region that no one wants to miss it while exploring Pakistan for a very first time.

Live hearted place Lahore is known for its one of the most beautiful historical monument, Badshahi Mosque. Located in the West of Lahore Fort, now this iconic landmark is a part of the Greater Iqbal Park in Lahore. Being in the ideal park with other historical monuments have made it more valued and a must visited tourism charm.

As  Badshahi Mosques was built in Mughal era and commissioned by Mughal emperor Aurangzeb in 1671, it’s exterior truly resembles with the architecture of Mughal era and is embellished with red sandstone and marble inlay. It was the largest mosque and center of the attention of the Mughal era and still have great fame in the list of top mosques around the globe.

Having rich traditional exterior, it’s Shah Jahan Mosque which is located in Thatta, Sindh province of Pakistan. It would be quite interesting to know that the mosque was gifted by Mughal King Shah Jahan to the masses of Sindh as a reward of the great-hearted hospitality. The mosque was completely built in 1647.

It is unique in this way that it contains no minarets but has a total of a staggering, 100 domes, the highest for any structure in Pakistan. Unlike other Mughal-era structures, it also does not contain pink sandstone.

Like another feather in Lahore’s cap, Grand Jamia Mosque has been recently built in Bahria Town, Lahore, Pakistan. Having a capacity for 70,000 worshipers, it’s privileged for being the third greatest mosque of Pakistan and seventh greatest mosque in the world.

This one of the most attractive mosques of Pakistan is situated in Karachi, Sindh province. Its distinctive architecture was designed by Pakistani architect Dr. Babar Hamid Chauhan and the engineering services were performed by Zaheer Haider Naqvi. It’s known as the largest single dome having a mosque of the world.

This is one of the recently built mosques of Pakistan during the last few decades. Bhong mosque is commendable for 90’s structure and is located in the backward area of Bhong village of District Sadiqabad, Rahim Yar Khan District in Southern Punjab province.

Its construction took time of 50 years from 1932-1982. Because of its exquisite architecture, Bhong mosque is privileged with 2 Awards, one won Aga Khan Award in 1986 and second was Sitara-e-Imtiaz granted in 2004.

Another mosque of Mughal era, situated in Peshawar city in Khyber Pakhtunkhwa province of Pakistan. It was built in 17th century on the name of the Mughal governor of Peshawar at that time, Nawab Mahabat Khan. He was designated as governor in the reign of 2 great Mughal emperors, Aurangzeb and Shah Jahan.

An interesting thing about the mosque is its name is been mispronounced with Muhabbat Khan (Love) khan but it is in actual Mahabat Khan.

The mosque is one of the masterpieces of architectures of Mughal era. It’s located in the city of Lahore, capital of Punjab province of Pakistan. It got 7 years in the completion of this versatile mosque from 1634 to 1641.

It was the reign of Mughal emperor Shah Jahan when the mosque was commissioned by the Mughal governor of Lahore named Shaikh Ilum Uddin Ansari who was commonly known as Wazir Khan. The design of the mosque true interpretation of Mughal architecture and famous among tourists because of its wonderful tile work.

One of the superior architectures commissioned by Mughal emperor Shah Jehan is Moti Mosque which is located inside the area of Lahore Fort. The location is on the western side of the fort near the main entrance gate called Alamgiri gate.

It was the religious building of 17th century. Its structure is made of white marble and is included in the attractive spots of Lahore Fort complex. The white marble was brought from Makrana which is another specialty of this material.

Adjacent to CMH Jhelum, this another beautiful place of worship is situated in Jhelum Cantonment Pakistan. The mosque also is known as DIV headquarter/DIV mosque. Muhammad Ayub Khan laid its foundation in 1951. CMH mosque is one of the largest mosques of Pakistan having the capacity to encompass 25,000 people at the same time.

Situated in the walled city of Lahore, Punjab, Pakistan. Also known as a golden mosque and was built in a late-Mughal era in 1753. Its architecture was designed by Nawab Bukhari Khan who was the deputy governor of Lahore in the reign of Muhammad Shah.

Although, Sunehri mosque also built in the 17th century unlike Badshahi and Wazir Khan mosque, the construction period of this mosque experienced a decline of Mughal empire.

As Lahore is home to Pakistan’s leading mosques, Dai Anga mosque also located in this city in the southeast os railway station. Dai Anga mosque is named after the wet nurse of Mughal emperor Shah Jahan and was built in her honor in 1635.

Similar to Wazir Khan mosque, its exterior is decorated with fine tiles and design depicts a true picture of Mughal architectures. 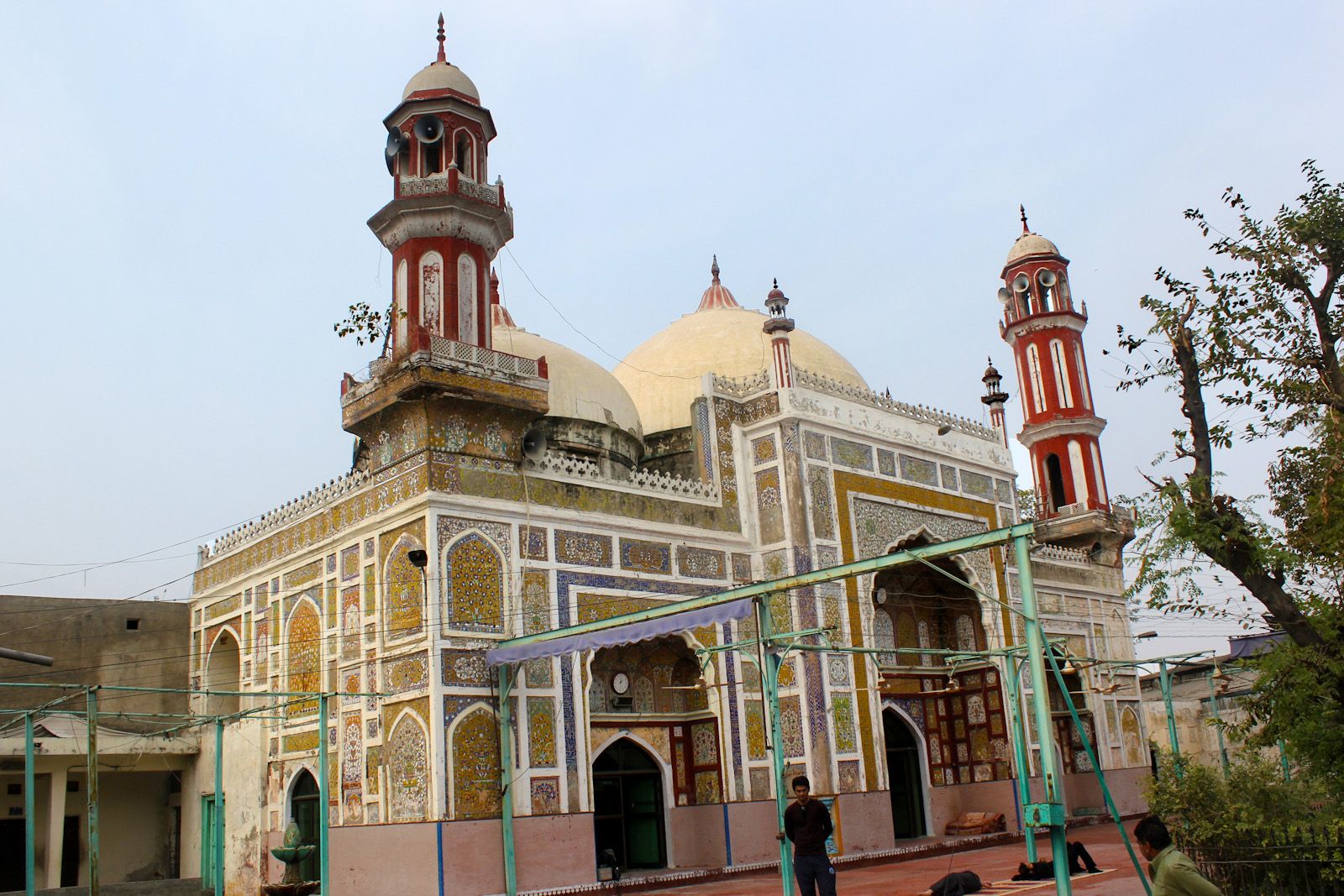 As Lahore is a glorious metropolitan area of the country and suburbs are more expanding its territory. Sukh Chayn Gardens Housing estate is another tremendous addition to its suburbanization and the community is renown for its stunning mosque called Sukh Chayn Masjid. Its architecture is quite unique and has embellished the look of the entire community. 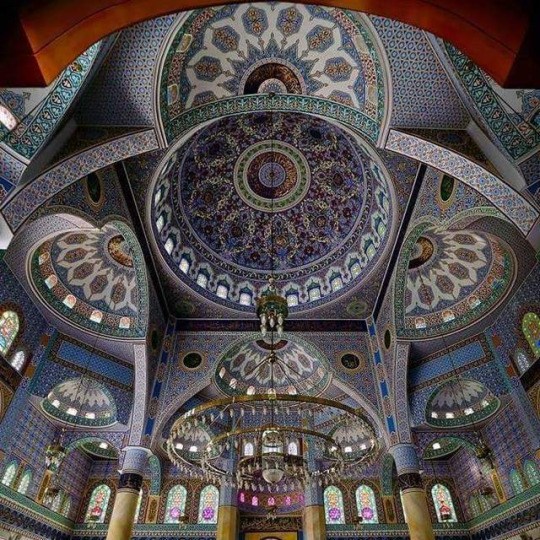 One of the most ancient mosques of Pakistan, Jamia mosque is situated in Khudabad, Dadu, Sindh province. History depicts that it was the reign of Yaar Muhammad Kalhoro when it was built between the time period of 1700-1718.

Having a fine and simple design, its architecture narrates a story of elegant construction patterns of that time.

The biggest mosque of Baghdad District of Mardan in Khyber Pakhtunkhwa province of Pakistan. Simple and distinct in its exterior and contains a large open area which makes the sitting area airy and lighted.

No doubt, Pakistan lies in the list of top countries having the greatest and most beautiful mosques in the world. To explore the leading mosques of Pakistan and to get the bounties of such sacred journey, let you extend your tourism expedition because the list is quite lengthy.